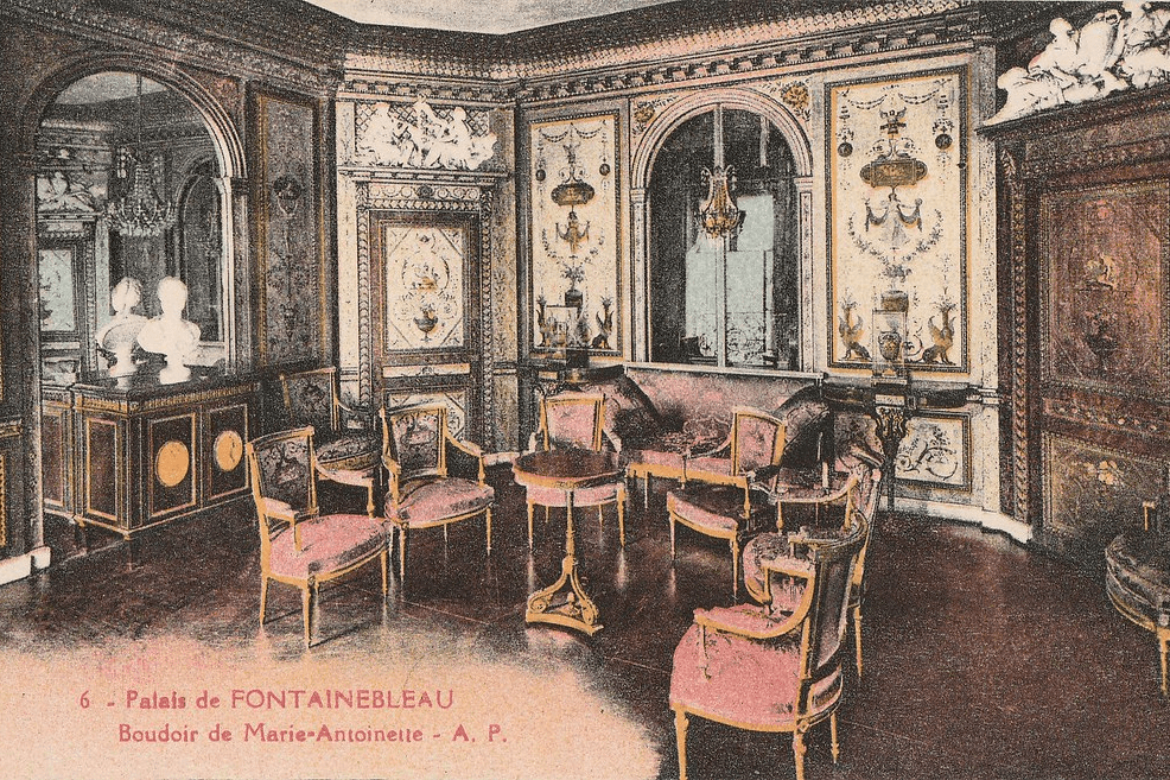 In a very small room on the mezzanine of the Château de Fontainebleau, Marie-Antoinette had dreamed of a refined and secret boudoir, where she could take refuge far from etiquette. It was a hiding place for the queen, then an empress. Those of Versailles having disappeared, this charming jewel is the last example of the royal turqueries so prized after Louis XV had opened the doors of the Ottoman Empire to the French.

In 1777, Marie-Antoinette, barely 22 years old, wanted to modernize a little the apartments arranged before her for Marie Leszczynska in Fontainebleau. In a very small room on the mezzanine, she had dreamed of a refined and secret boudoir, where she could take refuge far from etiquette, and taste the charms of this East whose time was in love with. The greatest artists then gathered to make his wish come true. The first architect, Richard Mique, had drawn up the plans and delegated the work to Nicolas-Marie Potain, newly appointed controller of the King’s Buildings in the department of Fontainebleau. He called on the best craftsmen: the Rousseau brothers got down to the painted and sculpted decorations of the paneling. Cupids, butterflies and other rustic evocations rubbed shoulders with turbans, eunuch busts, feathers, swords, moon crescents … The marble maker Bocciardi and the bronze maker Pierre Gouthière joined forces to create a delicate accented white marble fireplace. of a bronze frieze mixing, on a background of foliage, stars or those ears of corn that we also called turkey wheat …

The queen wanted that at nightfall, the lights behind the Turkish bed could be reflected in the window opposite. An ingenious craftsman, Jean-Tobie Mercklein, designed a mechanism that allowed the window overlooking Diana’s garden to be hidden behind a mirror. All the Queen had to do was pull on a rope to release the ice and press a button for it to fit into the partition. This clever system still exists and has just been restored with the help of Insead (European Institute of Business Administration).

In the Queen’s personal storage room, refined furniture was chosen for her Turkish boudoir in Fontainebleau. We do not know the details because everything was dispersed during the revolutionary sales. Only the fires about camels remain in the Louvre museum …

In his Souvenirs “A page in the court of Louis XVI, the Comte de France d’Hézecques evokes the boudoir as follows: “I have nevertheless kept the memory of a small cabinet of the queen, furnished in oriental taste, and lit in the evening by lamps placed in a wardrobe separated from the cabinet by a large mirror lined with taffeta, the color of which was changed at will; which gave a light as soft as the reflection was pleasant. “

In 1804, Joséphine inherited the royal boudoir, which she liked. She decided to make it a small bedroom. Two years later, the boudoir received its furniture, specially created in the workshop of Jacob-Desmalter. The highlight of this set was a large mahogany alcove bed. On either side, a seated greyhound watched over the sleep of the Empress. On the cross, two cupids firmly held the reins of an ancient chariot launched at a gallop and, in the center, in a medallion surrounded by double palmettes, an eagle, seated on a cup, announced the arrival of Hebe, the Goddess of Youth. Stars recalled those of the paneling. Two armchairs, a daybed or chaise longue – also called at the time “apple tree” -, a footstool, four gondola chairs, a fireplace screen and a pedestal table, just as ornate, completed the series. The exoticism was no longer felt so much in the patterns as in the richness and the mixture of fabrics. The mysterious and sensual Orient was above all suggested by the gold mixed with each of the fabrics.

Picot, embroiderer of the imperial court, provided for the alcove and the window, cotton muslins strewn with poppies, palmettes, myrtle wreaths and laurel. Other gold-trimmed white taffeta curtains were tightened in gold-fringed tiebacks attached to gilded bronze crescent moons. Above, a wholesale drapery from Tours thrown in vermicelli patterns in ponceau silk and gold leaf framed with gold fringes. On the window, the fabrics were superimposed in the same way, responding to the sparkles of the fabrics opposite when the ice was drawn. Gold still radiated the embroidery of the quilt and the coral satin bolsters. Perhaps the most precious fabric in the boudoir was the velvet that covered the furniture. “Close to so-called ” miniature ” velvets from the end of the 18th century, it is adorned with a scholarly geometry design, reminiscent of the Egyptian expedition, says Vincent Cochet, heritage curator at the Château de Fontainebleau. This design is formed by the silk hair on a background finely animated by the binding of the gold blades. “

After Joséphine, Marie-Louise took possession of the small apartments on the mezzanine, including the Turkish boudoir. She came there very little. Under the July Monarchy, the boudoir was used to accommodate a chambermaid, then it housed the treasurer of the Empress Eugenie’s cassette… Since then, these cramped rooms have hardly been used. 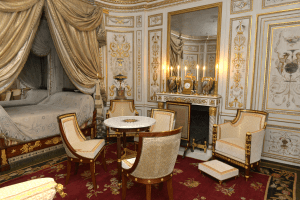 The furniture has therefore reached the 21st century in fairly good condition. The mahogany has been cleaned, the bronzes cleaned up, the varnishes regenerated by the cabinet restoration workshops of the castle. The condition of the tissues was more precarious. “We try to preserve the originals as much as possible,” explains Vincent Cochet. We were able to keep the original fittings of the window and the alcove. The embroidered muslins were washed with neutral soap, and the gold taper reattached on each piece. The taffeta curtains, however tattered, were dismantled and their trimmings reassembled identically on new taffeta. Textile restorer Isabelle Bédat was responsible for this meticulous work. ”

The curators of Fontainebleau, on the other hand, chose to have the trimmings of the seats rewoven by the Declercq house. Their precious velvet has also been re-woven identically. Missing in places, very worn, it was no longer described in the 1855 inventory as a white velvet, but a “buff” color and its gold blades had turned black. While the old fabric will remain piously preserved in the house’s reserves, the new one will help restore the oriental luster of the boudoir.

How many people can they today weave “a silk velvet cut simple white body with a lance lat made of a gold blade”? They are counted on the fingers of one hand. It is for its know-how that the Tassinari et Chatel manufacture was entrusted with this operation. The lack of a job available in the workshop at the time of the order prompted her to call on Agnès Alauzet. At the Maison des canuts, in the heart of the Croix-Rousse district, this heir to the great tradition of Lyonnais canuts has embarked on this adventure on a hand loom equipped with a Jacquard mechanism from the end of the 19th century.. “Of the some hundred thousand trades used in the Lyon region around 1860,” explains Philibert Varenne, who runs the Maison des Canuts, “there are still twenty-five, four of which with us, not counting the last one, a trade from Europe , which dates from the 16th century. “

Agnès Alauzet took nearly six months to set up her profession. He had to fill and assemble the dozens of spools of silk threads installed in a square of wood, the creel. She then had to adjust all the weights – one per spool! Then tackle the binding chain, the bottom one …

Finally, it was necessary to weave, to enter this large wooden cage that is the loom, to pass and iron the shuttles with the hands, while the feet play off the pedal. Agnes’ body dances, from right to left. Creating the same background effect as in the original velor is difficult. You have to find the right rhythm, the right gesture, to grope, to stop, to examine the strip of velvet which advances little by little, to be happy when you have woven its eight centimeters in a day. “My only problem,” she explains with a reserved smile, “is my body that sometimes struggles. So I do yoga, I pay close attention to my diet. ” However, it is neither the tendonitis of her shoulder nor the osteoarthritis that attacks her hands that will prevent Agnès Alauzet from pursuing this very physical profession. With her hands, her arms, the movement of her feet, she creates dreamlike fabrics. Didn’t it recreate a few years ago the fabric that served when the elector of Saxony Augustus the Strong was crowned King of Poland in 1697?

Creating the same background effect as in the original velor is difficult. You have to find the right rhythm, the right gesture, grope, stop, examine the strip of velvet which advances little by little, be happy when you have woven its eight centimeters in a day.

Until 2002, she had her own workshop on the slopes of Croix-Rousse, in the Cour des Voraces, then she retired to a village on the borders of Haute-Loire and Puy-de-Dôme. But it was a little isolated, and when Philibert Varenne and his wife obtained the management of the Maison des Canuts, recently bought by the City of Lyon, Agnès Alauzet returned to the former capital of the Gauls.

Today, the twenty-eight meters of velvet have been delivered to the Château de Fontainebleau. They are with the upholsterer Brazet in Paris and will soon find their place among the golden clothes of the Turkish boudoir.

This text is borrowed from а Special Edition of Le Figaro.